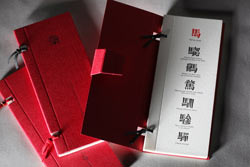 Hand Compositions by orientalist typographers with exclusive Imprimerie Nationale characters: Buis du Régent, Chinese characters engraved on wood between 1715 and 1742. Joseph de Guignes used them for the Chinese, French and Latin Dictionary, which he published in 1813 at the Imprimerie impériale at the express order of Napoléon Ier. 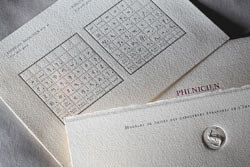 Case plates of the world’s main scripts, for which the Imprimerie Nationale holds the original punches. A case is a flat box, with compartments, in which typographers extract characters one by one in order to compose a text.

Each case model in the portfolio: 7 € 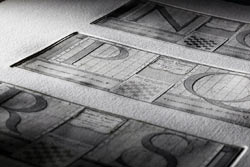 Nearly a century before the Enlightment Encyclopedia, Colbert published the description of handcrafts and manufacturing Processes (Description des arts et métiers). A commission was created under the authority of the Académie royale des sciences, to devise a new typographic character. In 1692, the commission formulated a mathematical and geometrical theory illustrated by a series of drawings and copper engravings by Simonneau and Rochefort: each letter is inserted in a grid made up of 2304 little squares for Roman capital letters and 2688 little squares for lower-cases. These drawings inspired Philippe Grandjean as he engraved Romain du Roi, also called the Grandjean.
A Grandjean alphabet book. 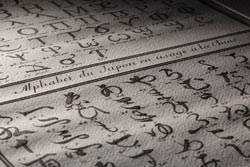 From 1695 Rochefort engraved a series of alphabets, which contributed to the construction of "Romain du Roi".
Later, Rochefort engraved a series of exotic, imaginary and esoteric alphabets. Colbert meant to publish these plates in a treatise on the description of handcrafts and manufacturing Processes (Description des arts et métiers). It was never published. The Imprimerie Natioanle’s Cabinet des Poinçons (Punch Room) holds all these copper plates. These engravings have never been published. Their unequalled beauty is here revealed for the first time. 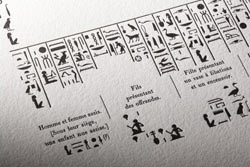 In 1882, William B. Berend published a collection of plates representing the main monuments of Florence’s Egyptian Museum. Dujardin’s intaglio prints came with transcriptions of the hieroglyphic inscriptions engraved on the buildings.

Engravings from ancient Egypt
3 models of engravings, I, II and III, with historical texts and hieroglyphic compositions, each in a portfolio.
The text is composed by hand with exclusive characters from the Imprimerie Nationale: hieroglyphs and Marcellin-Legrand.

Engravings based on original intaglio printing printed on an 18th Century press at the Imprimerie Nationale’s Atelier du Livre d’Art et de l’Estampe.
Each engraving is printed in 70 copies, 10 of which are privately printed.