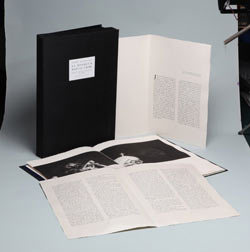 Based on a short story from Diaboliques by Barbey d’Aurevilly.

Barbey d’Aurevilly’s short story, illustrated by Dado tells the story of a man who kills his wife under his mistress’ influence. The lovers go on to live an idyllic love affair.

The book is made up of 21 pages (56 x 76 cm) folded in folio, placed in a portfolio in white pure chiffon vellum fine grain 270g paper and in a box covered in black Comtesse canvas and dark blue flocked lining. Printed in: 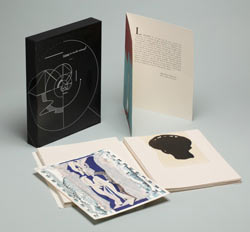 48 texts chosen among the texts written and speeches made by those who inspired or participated in the French Revolution, with 8 lithographies of contemporary painters: Aillaud, Alberola, Alechinsky, Arikha, Blais, Buraglio, Messagier, Rouan.

156 pages - Format 32 x 42 cm
Co-edited with the Centre national des arts plastiques for the bicentennial of the French Revolution. This book was contrived by Dominique Bozo, Jean-Michel Foray, Jean de Bengy, assisted by Hélène Vassal, who chose the texts and their printing order. 48 written texts or speeches from the Age of Enlightment composed by hand in Romain du Roi, designed by Philippe Grandjean, and printed on the Imprimerie Nationale’s typographic presses. 8 original lithographies by Gilles Aillaud, Jean-Michel Alberola, Pierre Alechinsky, Jean-Charles Blais, Pierre Buraglio, Jean Messagier, François Rouan printed on a special lithographic Voirin press at the Imprimerie Nationale. Avigdor Arikha’s original lithography was printed at the Imprimerie Clot, Bramsens and Georges. The box was printed by Fourier, serigrapher in Calais, and made by Reliure du Centre and Duval in Paris based on a model by Philippe Apeloig.
Printed in September 1989.

Limited to 200 copies:
100 as Presidential gifts
100 on sale via the Imprimerie nationale. 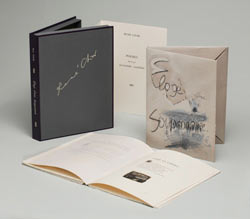 René Char died on 19 February 1988, before the completion of this book which he saw as a new step in his collaboration with Alexandre Galpérine. René Char chose every single art print in this edition and asked Alexandre Galpérine to invent swash initial in illuminator style.

52 pages - Format 29 x 38,5 cm
René Char’s last poem collection, dedicated to his late wife Marie-Claude and project manager. The poems are composed by hand in Romain du Roi character, 24 point font, designed by Philippe Grandjean, on off-white Vellum d’Arches, 270 g, specially made with the Imprimerie Nationale’s watermark.
27 lithographies and 13 original swash initial designed by Alexandre Galpérine. They have been specially printed on the Voirin press of the Atelier du Livre d’Art et de l’Estampe at the Imprimerie nationale. Éloge d’une soupçonnée is presented in a Moulin du Gué envelope folder, 300g, decorated with an original lithography by Galpérine (28 x 37 cm) and in box made by Reliure d’art du Centre in Limoges. The work is printed on the Imprimerie Nationale’s typographic presses.
Printed in June 1990. 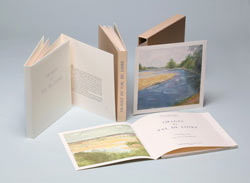 The painter’s affective memory enriches the « instants » illustrating Images du Val de Loire. Maurice Genevoix’s text recalls his youth in Decize, Hanoteau’s hometown.
These aquarelles are a real tribute to the author: « My journey follows Maurice Genevoix’s along the Val de Loire, as if we had sailed down the river together…» 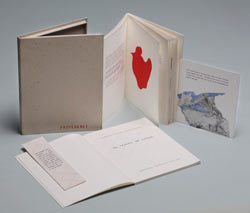 The authors hold a rose of memory. The rose unfurls to the sound of jazz and through extracts of works by Shakespeare, Proust and others.

5 numbered head copies, including a collage by the artist: Sold out 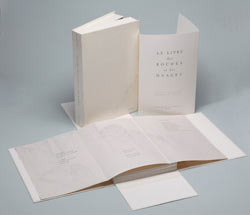 This book arouse out of a meeting between Israeli painter Raffi Kaiser and Scottish poet Kenneth White.
Le Livre des roches et des nuages is an open book, its 26 triptychs open up into a landscape, with original poems. 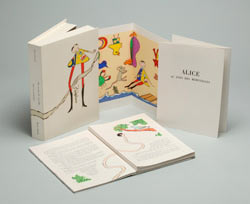 Martin Bradley's artwork, similar to Klee's, conveys the nonsensical atmosphere of this "ever so british" book.

English 108 pages
French 68 pages
Format 25,5 x 36,5 cm.
English text composed by hand in Marcellin-Legrand 16 point font.
Comes with a booklet with the French translation composed in Bodoni 12 point font.
Printed in May 1994
64 illustrations by Martin Bradley printed on BFK Rives paper, 210g, on a lithographic press at the Imprimerie Nationale 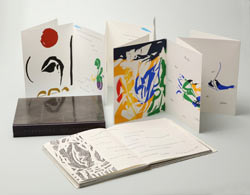 « This is not a book. It is a floodlit place, a work without a frame and with tin sides. This collector’s work was entirely designed by the painter. The authors embarked on a journey of images and words, on a path of tracks and prints, to the rhythm of the projection of atomized colours.»

Limited to 120 numbered and signed copies. 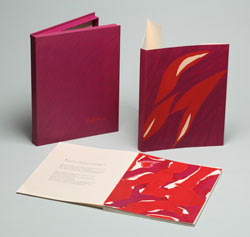 The preface is a handwritten letter by André Frénaud, written in July 1979. Jean Bazaine’s postface is a posthumous tribute to André Frénaud who died while the book was being printed. André Frénaud’s long poem and Bazaine’s twelve lithographies reveal their mysterious correspondence.

Limited to 70 copies – all copies have been numbered and signed by the artist. 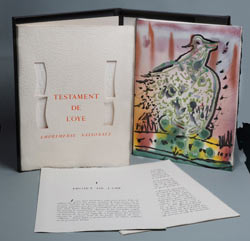 Jean-Paul Riopelle lives a small isolated house on the island of île-aux-oies on the Saint-Laurent riverbank. For him, the injured goose is the symbol of a cosmogony inspired by the observation of their yearly migration. Painter Jean-Paul Riopelle and novelist Gilbert Erouart embarked on this project together to speak for this agony.

Testament de l’Oye is presented in a box designed by the Dermont-Duval workshop.
The box is printed in 70 numbered and signed copies:
20 numbered copies, privately printed.

10 numbered copies, with a series of 6 numbered lithographic prints signed by the artist: Sold out 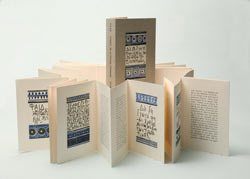 Limited to 100 copies:
25 numbered copies, privately printed
5 numbered head copies, with 12 engravings and an original by Jean Cortot and a page from Michel Déon’s manuscript.

10 deluxe copies with 12 engravings, numbered from VI to XV: Sold out 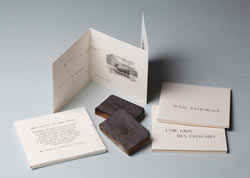 As a tribute to the masters of French engraving of the 19th Century, the Cabinet des Poinçons (Punch Room) presents a collection of wood engravings, associated with a series of texts on various themes. Each series associates 5 engravings printed on original wood, and hand composed texts, composed with the Imprimerie Nationale’s historical typefaces.