Tour of our Savoir faire

The Atelier of the Imprimerie Nationale is the only facility of its kind in the world that covers the history of the printed book and shows the craft techniques involved; it combines the exceptional heritage of its collections, the earliest of which date back to the reign of François I (punches, matrices, copper plates, vignettes, lettering tools and wood blocks, a total of almost 700,000 objects), the range of craft trades that make up the history of printing and its techniques.

The creation of printing types, punchcutting, type casting, manual and mechanical typesetting in Latin and Oriental type, typographic printing and copperplate engraving and printing, all these trades are still alive at the Imprimerie Nationale. 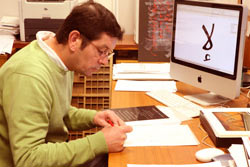 The Imprimerie Nationale designs fonts for towns or companies, creating their typogrphic identity. In 2002, Franck Jalleau created the Brive, for the town of Brive-la-Gaillarde. In recent years, the Imprimerie Nationale has launched a program to adapt the typographic collection to digital composition. Franck Jalleau has also redesigned, among others, Latin characters as well as the King’s Greek, engraved by Claude Garamont, for an Odes olympiques edition for the Athens Olympics. 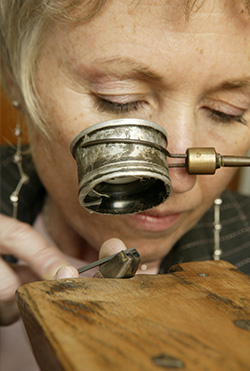 For the past five hundred years, mobile typefaces have been made in three stages: punchcutting, « frappe de la matrice » and founding of thousands of typographic typefaces (in an alloy of lead, antimony and tin).

A punch is a steel bar onto which the punchcutter draws and engraves, in relief and in reverse, a letter or a vignette. Once the punchcutter is satisfied with the result, the punch is hardened and ready for the “frappe de la matrice”. Le cabinet des Poinçons (Punch Room), the treasure of the Imprimerie Nationale, preserves approximately 700 000 pieces, including the oldest, which go back to François Ier: King’s Greek punches created by Claude Garamont. 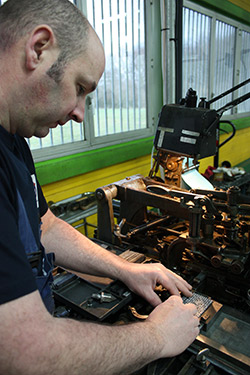 Once hardened by thermal treatment, the punch is cold stamped into a block of copper (an operation referred to as « frappe de la matrice »). It is then justified and moulded. In the past this was done with hand moulds but, since the 19th Century, mechanical casting machines have replaced them. This technique enables the production of millions of identical types, from a single letter matrix. Typographs can then distribute these characters by hand, and letter by letter, in a wooden case.

The Monotype system is a set of two machines, the monotype keyboard, on which characters are arranged and punched on a paper tape, and a monotype caster, which automatically reads the tape and produces a text in lead typefaces which can be used for printing.

The Linotype machine produces an entire line of metal typefaces. The machine assembles matrices in a line. The assembled line is then justified, cast, planed and delivered on a galley, behind the previous line, ready for layout and printing. The matrices are then returned to the typeface magazine from which they came. 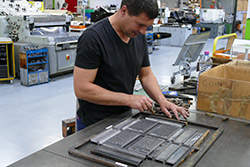 The words and lines thus created are bound into a "forme", set in a galley and printed on a typographic press. The Imprimerie Nationale's hand type setters use seven historic and exclusive typefaces: François Ier of France's Garamont, Louis XIV's Grandjean and Jaugeon, Louis XV's Luce, Napoleon 1er's Didot, Charles X's Marcellin-Legrand and Gauthier, the last block up types engraved in the1970's. The typographic library enables orientalist typographers, a profession invented by Napoleon in 1813, to compose from over 65 different alphabets: Chinese, Greek, Arabic (12 styles), Hebrew, Sanskrit and Tibetan… 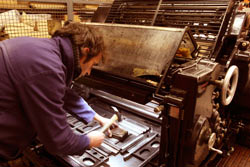 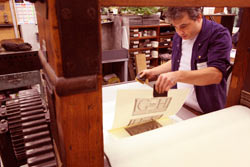 Engraving, by burin, is the practice of incising a design on to a hard surface by cutting grooves into it in order to get a paper reproduction of the design. Before printing takes place, the plate is covered with ink and cleaned off. The ink seeps into the finest of depressions and fills the lines of the drawing. The rest of the plate is cleaned off. The copper plate is now pressed with a printing press on to moistened paper that soaks up the ink from the depressions in the plate. The ink absorbed by the paper varies according to the depthness of the dents, enabling the engraver to modify tones and textures. 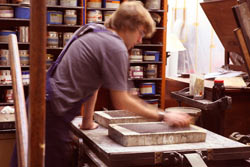 Lithography is the reproduction of an image, which has been drawn with a greasy crayon or ink, onto limestone (or zinc). It works because of the mutual repulsion of oil and water. Water keeps oil-based ink from attaching onto the non-printing areas, and the greasy parts of the stone permit the ink to stick. 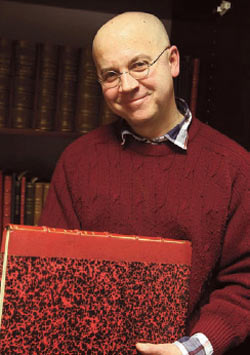 Correction consists of the copy preparation and proof-reading at different stages, even after imposition. At this stage, text and image layout control, alignment and margin verification, number verification and recto-verso marking are just as important as the reading itself. 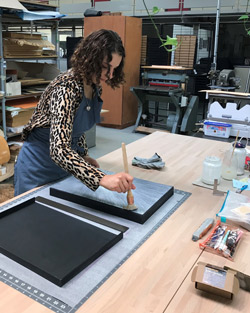 These may be cut flush, deckle edged or even torn to book format.

The final presentation will consist in a book block of loose signatures or signatures sewed with a curved needle and a flax thread.