Exhibitions at home and elsewhere

For more than twenty years, the Imprimerie Nationale has placed its historical heritage, one of the most important in the world in the field of arts and graphic industries, at the disposal of cultural institutions around the world (museums, libraries and media libraries, local authorities, etc.).

In addition, the Imprimerie Nationale and its Atelier du Livre d’art & de l’Estampe, offers a whole range of thematic exhibitions based on its heritage (works released from the presses of the establishment since François I, punches of Latin and oriental characters allowing to compose in more than 65 writings, printing material) and on its know-how preserved until today. Numerous exhibitions have thus exploited the themes of the letter, the history of the book, Orientalism or the printing professions, accompanied by demonstrations or conferences. 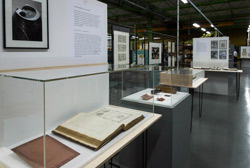 This permanent in situ exhibition devoted to the history of the Imprimerie Nationale founded in 1640 and its unique collections in the world (700,000 engraved pieces and 35,000 works), brings together around a hundred engraved pieces and historical works published by the establishment. State since its origins. The different sections of the exhibition retrace five centuries of history from the King's printers to the most recent artist's books. This exhibition also covers the birth of the Imprimerie Royale at the Louvre Palace in 1640, the seven exclusive characters of the Imprimerie Nationale, the works of the King's Cabinet, major scientific works (the Natural History of Buffon, the great books of travel around the world such as that of La Pérouse, the Description de l'Égypte, an unpublished study by Champollion on the deciphering of hieroglyphs, etc.), the main oriental characters engraved between the 16th and 19th centuries (Euclidean Arabic, Kufic Arabic, Karmatic Arabic, Aldian Arabic, Ninivite cuneiform, Phoenician, Tifinag, etc.) and the works published thanks to them, the Boxwood of the Regent (Chinese characters engraved on wood between 1715 and 1742). In the section devoted to painter's books and artist's books, there are works illustrated by Bonnard, Chagall, Matisse, Maurice Denis, Dunoyer de Segonzac, Giacometti, Toni Soulié, Barcelò… 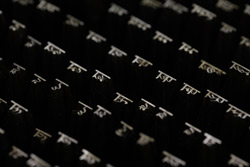 The Deutsches Historisches Museum in Berlin asked the Imprimerie Nationale for the loan of Nâgarî (or Devanâgarî) punches as part of an exhibition on the von Humboldt brothers, Wilhelm and Alexander, which took place from November 21, 2019 to 19 April 2020. These 20 body punches had been engraved for Germany, ordered by August Wilhelm Schlegel from Vibert in 1821. They were handed over by the Prussian government to the Asian Society in 1824, through Wilhelm von Humboldt, before to be ceded to the Royal Printing Office in 1833. Wilhelm von Humboldt (1767-1835) was a philosopher, diplomat, founder of the University of Berlin (which bears his name and that of his brother since 1949), and above all a linguist and philosopher of language. His brother Alexander (1769-1859) was a naturalist, geographer and explorer, associate member of the Academy of Sciences and president of the Société de géographie de Paris.
The Nagare script is used to transcribe different languages of the Indian subcontinent. Far derived from the Brahmî script, it appears in its classical form around the thirteenth century in central India and was then used for secular and sacred uses, noting Hindi, the official language of India, derived from ancient Sanskrit , and Sanskrit, Brahmanic religious language. Most of the characters have a horizontal line at the top, and a vertical one forming a gallows.

This was the title of the exhibition which took place from June 5 to July 13, 2018 at the Marceline Desbordes-Valmore library in Douai.

This exhibition draws on the rich collections of the Imprimerie Nationale and aims to recall Napoleon's contribution to a better knowledge of Egypt and the Orient. If the Expedition to Egypt (1798-1801) ended in military disaster, the Cairo workshop of the Republic's Printing Office notably printed La Décade égyptienne, Egypt’s first newspaper.

The “Commission des Sciences & des Arts”, made up of 167 scientists such as the mathematicians Monge or Fourier, the chemist Berthollet or the naturalist Geoffroy Saint-Hilaire, through its scientific observations, allows the Imperial then Royal Printing to publish the legendary Description of Egypt in 23 volumes (1809-1826) and 974 plates, first encyclopedia on a country, mythical, monumental work, never equaled, several volumes of which are exhibited.

The oriental dream of Napoleon Bonaparte took shape in the printing press, which had become imperial, directed by Jean-Joseph Marcel, who had new oriental characters engraved and published in 1813 the first Chinese, French & Latin dictionary, composed with the Regent's Boxwood, characters Chinese woodcuts between 1715 and 1742 and completed for this edition, which allowed the development of sinology in France. To establish his power, Napoleon went so far as to order a typography: the Emperor's Romain or millimeter Didot. Napoleon's eastern ambition was so exemplary that he found it essential, in the midst of the collapse of his troops in the East, to sign the decree of March 22, 1813 organizing the recruitment of young composers to the Imperial Printing Office, future typographers. Orientalists, capable of composing in all foreign writings.

Thanks to the study of a reproduction of the Rosetta Stone discovered by an officer of the Army of the East in 1799, Champollion succeeded in deciphering the hieroglyphs in 1822. The exhibition presents an almost unique work, a study of the Rosette inscription annotated in the hand of Champollion, but also the first hieroglyphic punches engraved between 1842 and 1852.

The exhibition continues with an evocation of Orientalism in the 19th century, which will be carried relentlessly by the Imprimerie Nationale, in its scientific dimension, thanks to its collection of oriental characters which was and remains the most exceptional in the world, and to its orientalist composers, at the service of scholars. Today, Orientalism continues at the Imprimerie Nationale, thanks to the digitization of exotic characters, like the tifinag, the writing of the Tuareg.

Travel books, manuals of oriental typography, books published in Cairo, Arabic, Syriac, Hebrew, Coptic, Tibetan hallmarks, Chinese wooden characters, hieroglyphs, the large volumes of the Description of Egypt, the Chinese Dictionary, the Oriental Collection , a selection of scholarly publications, as well as the reconstruction of a printing workshop, follow one another in a historical, literary, scientific and typographical journey, revealing a little known, rarely exposed facet of the Napoleonic legend. 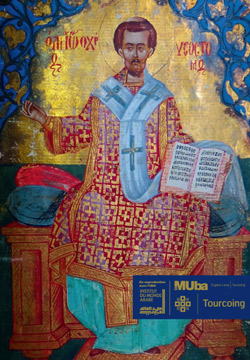 For this exhibition initially presented at the Institut du monde arabe in Paris from September 26, 2017 to January 14, 2018, then at the MUba Eugène Leroy in Tourcoing from February 22 to June 11, 2018, the Imprimerie Nationale granted major loans, in particular copper plates engraved in intaglio reproducing exotic alphabets engraved by Pierre de Rochefort between 1716 and 1719: general alphabet of the Maronites and Syriac alphabets. This series of alphabets was intended to be reproduced in a treatise devoted to the art of the book which was to inaugurate the collection of the Description des arts et métiers desired by Colbert. Other loans included various hallmarks, including the Arabic hallmarks of the Four Gospels, engraved by Robert Granjon in the 16th century, from the Imprimerie des Médicis and kept in the collections of the Imprimerie Nationale.

New York, 2012:
« Printing for Kingdom, Empire and Republic, Treasures of the Archives of the Imprimerie nationale »

From December 2011 to February 2012, the Imprimerie Nationale was a guest of the Grolier Club of New York for an exceptional exhibition entitled "Printing for Kingdom, Empire and Republic, Treasures of the Archives of the Imprimerie nationale".

From the collections of the Imprimerie Nationale, the exhibition traces the history of printing and its influence on publishing and typography over the past five centuries.

Nearly 200 major pieces, most of which are listed as historical monuments, have been exhibited, some for the first time, in the two galleries of the Grolier Club, including original manuscripts, old books and artists' books from the 20th century. , prints, punches and dies dating from the 16th century to the present day, engraved brass used to produce illustrations.